This is the first in a series of blog posts about iOS deployment and experiences setting up a continuous testing and build server for iOS apps. These posts are of interest to individual developers wanting to understand more, but mainly targeting small development teams trying to manage their development, testing and deployment process.

One of the first things that hit me when I first stepped into the world of iOS development was the terminology around the deployment process. Apple have developed a system such that only cryptographically signed binaries can run on iPhones & iPads. However the whole process by which this is done seems at first completely arcane and bewildering. So here is, hopefully, some clarification based upon what I've learnt over the past few months.

This is the basic piece of information that is used to sign the resultant binary of your app. If the binary is not signed by a certificate then it won't run on your device. End of story.

There are two types of certificate:

The person that has the key has the sole ability to sign apps for that organisation. This is where the headache begins. The key is on Bob's computer. Bob is on holiday. Jane needs to do a release. Now what?

There are two strings that are used to identify apps and what they can do. They are the 'Bundle ID' and the 'App ID'. Just to confuse things, the Bundle ID is the unique identifier for an app, not the App ID.

A very thorough explanation can be found on this stackoverflow post:

The App ID is created in the Apple Developer Center (Xcode can do this for you) and specifies what 'entitlements' the app has. e.g. Access to HealthKit data, or VPN control. Hence whilst a wildcard App ID is great in the general case, you will want different App IDs later on when you want apps to have different entitlements.

The provisioning profile is the piece of 'glue' metadata that associates a device with a certificate and App ID.

There are three types of provisioning profile:

Typically, when developing with Xcode, it will manage the provisioning profiles for you and select the appropriate one at the right time. However as we will see in later posts in this series there are times when we will want to manually select one.

Xcode will use the Bundle ID of the app you are working on and look it up in the Apple Developer Center to find the provisioning profile with an App ID that is compatible with the Bundle ID.

The UDID is the unique device id. Each Apple device has one, and they are used to identify a particular device.

In order to deploy an app via an adhoc profile you need to add the UDID of the device you want to deploy to into the provisioning profile. This is done in the Apple Developer Center. 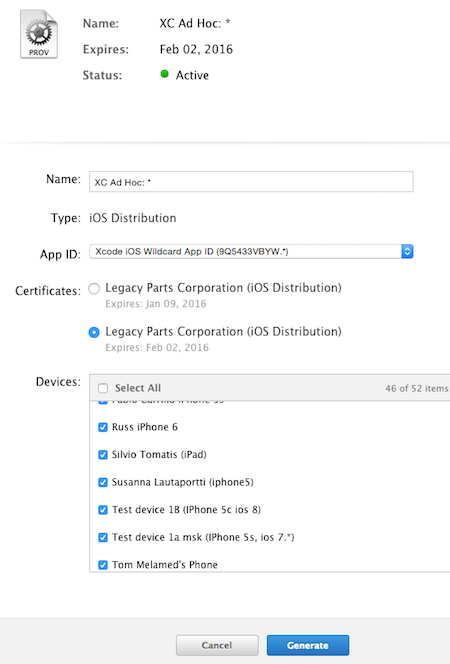 This is only an issue for adhoc profiles and distribution. If you are using Apple's TestFlight service then you use a store provisioning profile and you can add additional testers at any point. Even after a release has been uploaded to TestFlight. I'll talk about different distributions methods in a later post in this series.

You can have as many schemes as you want, but only one can be active at a time. You can specify whether a scheme should be stored in a project—in which case it’s available in every workspace that includes that project, or in the workspace—in which case it’s available only in that workspace. When you select an active scheme, you also select a run destination (that is, the architecture of the hardware for which the products are built).

I hope this helps to understand some of the parts of the development process. Much of this is handled automatically by Xcode for you, but in the subsequent posts in this series it will help to understand what is going on under the covers.

This is all based upon my experience of the past few months, if anyone spots anything I've got wrong, let me know in the comments below!