So, Ripple have this piece of software called xRapid. The role of xRapid, for those that don't know, is to be an "on demand liquidity sourcing solution". So what does that mean? It means that xRapid uses public liquidity pools -- in this case crypto currency exchanges -- and buys and sells a digital asset (XRP) on demand, to satisfy a payment.

So in order to send a payment from, say Mexico to Thailand, it goes something like this:

All of that happens in under a minute, and is fully orchastrated by xRapid. The customer doesn't see any of it. All they know is that their payment has been made and got there in under a minute. As opposed to the 3 days it would likely take using the main alternative, SWIFT.

So this process involves:

Some people say "How can that be cheaper than the current system?! You have two FX exchanges in there, with their associated fees and spreads". Recently a customer of Ripple, Mercury FX were telling of the cost savings they made using xRapid to make a payment from the UK to Mexico, and they supposedly made a saving of nearly £80 on a £3,500 transaction:

To explore this a bit, I wrote a quick and dirty simulator to try and get a feel for the costs involved. The simulator connects to two exchanges and checks the current order books on each one and works out the cost of the two FX transactions using actual real order book data. This means it gives a feel for the size of the orders that xRapid could process at the moment.

The code of the simulator is on Github so anyone can have a play with it.

Let's have a go shall we and see if the savings claim of Mercury FX stacks up. Firstly, there are not any actual xRapid exchanges (that I know of) in the UK and using GBP. So I'm going to assume that they actually had an EUR account and started the transaction from there.

It assumes that the cost to transfer on the XRP Ledger is negligible (it is thousandths of a cent per payment), and assumes there are no deposit/withdrawal fees at each end. It also doesn't include whatever cut Mercury FX take of the transaction.

How does that compare? Well, Transferwise will helpfully tell me how their service compares to the banks, so lets see what it would cost with them: 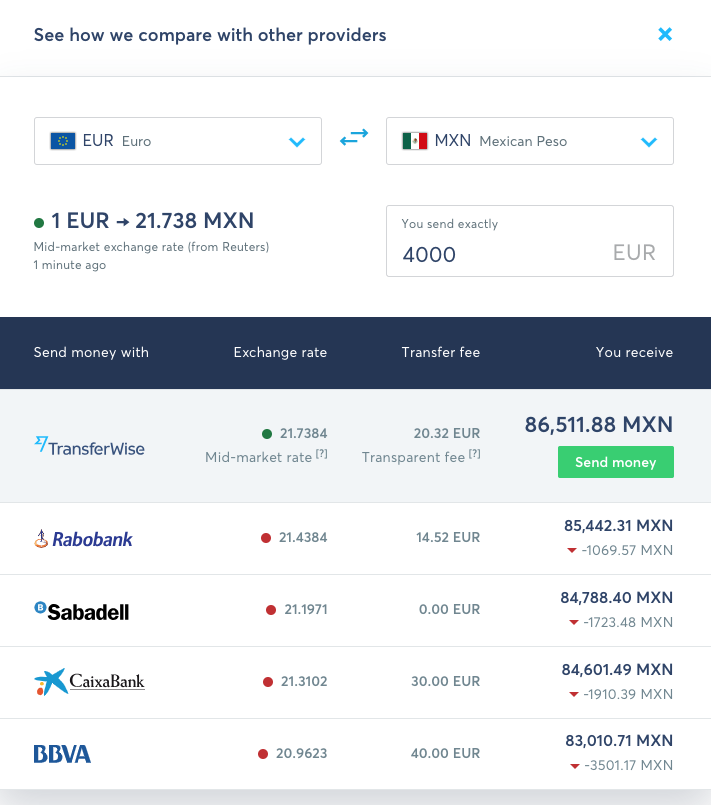 As we can see, Transferwise's prices are pretty good, and at 86,511.88 MXN, you would get about 1.8% better rate with Transferwise. But that said, it would take 5 days from today to get there! It is the 16th Feb now, and it estimates it should arrive by 21st Feb.

Transferwise gives us the comparison to four other banks. One of those banks Rabobank, is better than our rate above with xRapid. But the other three are worse. If we take the example of BBVA then you would get 83,010.71 MXN. Which is 1,910 MXN less than we would get with xRapid. How much is 1,910 MXN? Approximately £77.

Which is very much in line with the £79.17 that Mercury FX claimed their client saved.

So I'd say it is very feasible that the cost savings are very real and in line with that has been claimed.

For further fun, you can use the xRapid simulator to test what transfers would cost between any exchange supported by the CCXT library used.

For example, want to pretend that the Braziliex exchange is xRapid enabled, and you want to send Brazilian Real to Mexico?

Transferwise says they could do it for a better rate resulting in 20,226 MXN. Again, it won't get there for 4 days, until the 20th Feb.

They do give the option of Paypal for cost comparison. Which whilst might be quick, only gives you 17,550 MXN. A whopping 12% lower rate than you would get with xRapid! 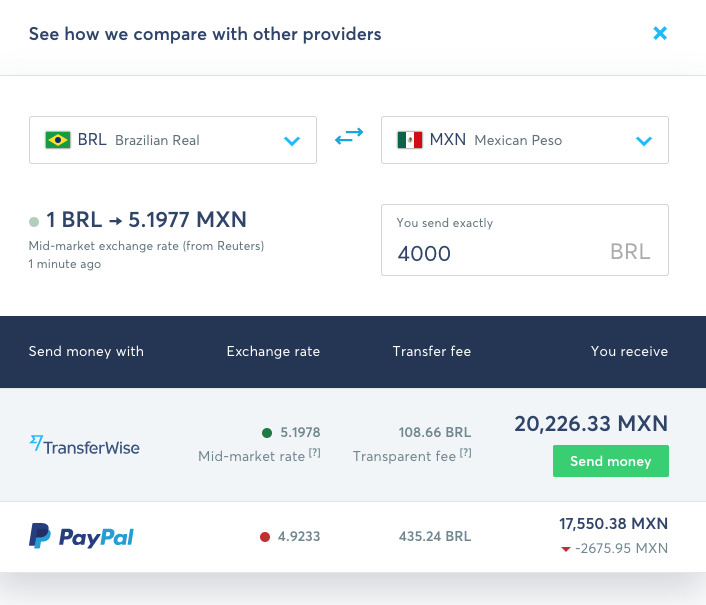 And, for even more fun, you can even use a different 'transport' cryptocurrency if you want. Whilst XRP is of course the one we are interested in as it is so cheap and fast to move about, using BTC in examples opens up the chance to play with other exchanges that don't list XRP yet. e.g. want to test sending 4 million Indonesian Rupiah to Mexico, using Bitcoin at the transport?

In this case, Transferwise can't give me a price for this. That is because they don't have IDR -> MXN as a payment route. One of the main aims of xRapid is to remove the need for pre-funding of accounts at each end. This means that more 'exotic' payment routes will be possible without having each bank holding such a vast array of exotic (to them!) currencies.