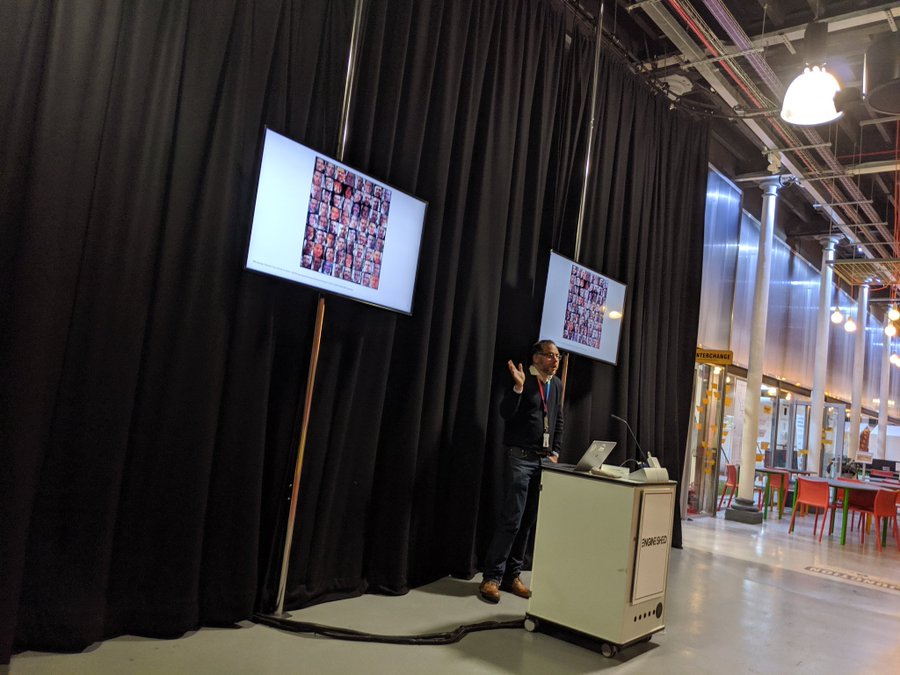 This post was originally written on my Coil site, which is currently my main blogging platform. On there you will also see bonus content if you are a Coil subscriber.
https://coil.com/p/hammertoe/Weeknotes-2020-11/Ehg-KjV0

I mentioned last week that I am about to start 'weeknoting'. Weeknotes, are getting back to the original essence of 'blogging'. A term that was a portmanteu of 'web log'... literally a log of what is going on. For a more in-depth view of weeknotes and their ressurance throught the GovCamp movement see here.

So I've just had my first full week in my new role as a Developer Advocate for IBM. How has it gone? Well it has certainly been a pretty eventful week. Last Monday I went up to London to meet a few of the team. The IBM Developer Advocate London City Team are based in a We-work big glass 7-storey WeWork building in Moorgate. The trip up from Bristol was delightfully uneventful. There is now a new direct train from Bristol Parkway to London Paddington, then about half a dozen stops on the tube to Moorgate and the office is just next to the tube station.

I met some of the team. A great bunch of people I'm really looking forward to working with. One of the projects they are working on is a series of 'What is?' videos. These will be short 90 second videos explaining various topics and terms, such as containers, blockchain, etc. They plan to film a few of these each week, and I'm looking forward to get stuck in as this very much aligns with the longer form videos I was doing on cryptocurrencies last year.

I've heard of WeWork recently (as many have) due to the financial issues it has been having. I've worked in co-working spaces before and never thought much of them or what all the fuss about WeWork was. But this place is something else... has an amazing buzz about it. Partly due to the fact all the offices are glass so you can see from one side of the building right through about half a dozen offices and out the other side. Gives it both a very open feel, but also you see all the activity going on.

I actually nearly got recruited by someone else before even making it to the office! I was sat in the foyer of WeWork as I didn't have an access pass yet, waiting for someone from the team to come down and fetch me. A gentleman I didn't know (but I didn't really know any of the team yet) came up to me and offered out his hand:

I shook his hand and he ushered my towards a cafe-style table in the foyer.

"Yeah, came up on the train, all went smoothly"

We chatted for a bit, then he said:

"So, you going to work after this?"

I looked puzzled at him, then it hit me... I was not who he thought I was, and he wasn't one of the team I was due to be meeting. Turns out his name is Matt. And he was expecting to meet someone called Steve.

So... yeah... turns out he was a recruitment agent and doing interviews today and though I was a prospective candidate.

I'm sat on the train again now heading up. This has certainly been a test of the process this morning, as my wife's knee dislocated last night. She has an ongoing degenerative issue with it, and last night just getting up from the dinner table it went and she ended up on the floor. Also my youngest daughter is home from school with a cough. So this morning was racing about sorting out thermos flasks of tea and food for her as she is bed-bound. Eldest daughter is home, so can keep an eye on her. But between dealing with a very tired and upset 9 year old and having to take the dog out for walk, and get eveybody ready before leaving the house, it was a bit of a push. But a mad cycle to the station and made it in the end with 10 mins to spare.

Most of the team should be in London today, and there is another new starter to the team, so we are all going out for lunch, so I didn't want to miss it. I am also on-call for my old job this week as part of the transition process, so dealing with incoming pager alerts too. Will be a busy day.

Also last week I gave a remote lecture on machine learning and AI to a class of Computer Science students at Samford University in Alabama.

Then Later on that evening I joined one of my new colleuages, Sean, to do a workshop in Bristol on serving machine learning models in the cloud. This was part of a series of IBM Developer events we run in cities around the country (and world) and I hope to be running more of these in Bristol in the coming year. 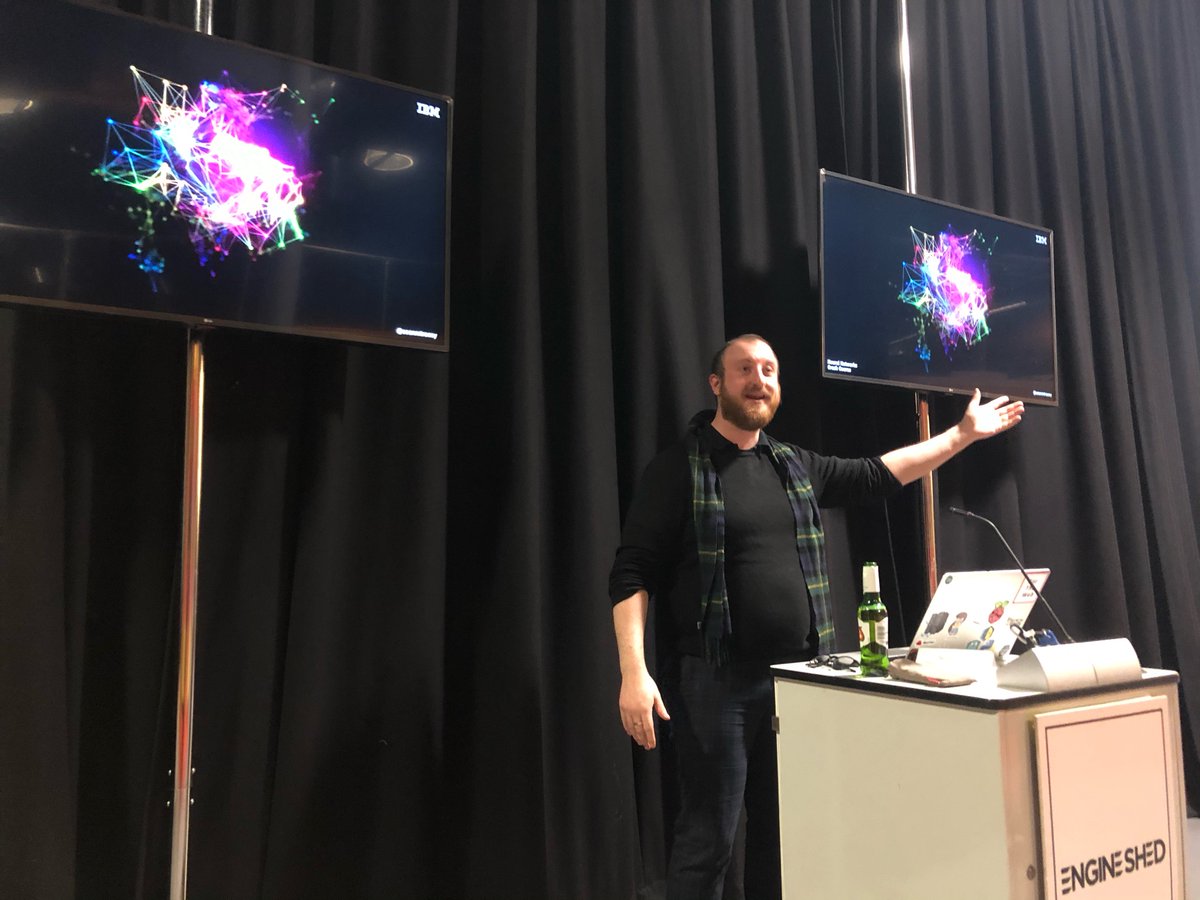 At the end of the talk, Sean invited me up to do a part of the talk I'd just done earlier to the students. Both our talks touched on some common topics, and it was great to hear the same thing explained in different ways.

One of the main parts of my new role will be going to conferences and meetups and doing talks. However the current Corona virus pandemic may put a bit of a dent in that. So far most of the big tech companies (IBM included) have cancelled their annual developer events. I am also due to be doing a talk at the DragonPy conference in Slovenia next month. The organisers are trying to decide if it will still go ahead. The Slovenian govt has just put a ban on gatherings of over 500 people. This conference is going to be smaller than that as far as I know, but still... not an easy decision for the organisers.

The rest of this past week, I've been settling in, doing some housekeeping on my laptop and tidying up / archiving stuff from my old role and starting to look about at various learning topics for my new role.

One of the things that interests me is IBM's LinuxONE offering. This is Linux running on IBM zSeries mainframes. IBM put this under their ' HyperProtect ' offering. One of the key things that zSeries offers is encryption of data at all levels. So I spun up a HyperProtect VM on IBM Cloud and had a go at compiling and installing some stuff to see what it is like. There are a lot of packages already compiled for it, but I was interested in installing the latest Boost C++ package, which means compiling from source as the current Ubuntu package is a bit old.

I couldn't quite get Boost working. Well, it compiled OK, but there is a particular set of functions missing. I see in the official apt packages that they have some patches related to it, so I'm going to try and install the latest source package and see how I get on.